Have a knack for the odd and amazing?


AnotherStupidIdea.com intends to satiate fanboy obsessions with an Internet meme of categories paying homage to the odd and amazing. Inspired by rare objects and oddities that were featured on Discovery Channel’s aptly-called Oddities, Founder Hanniel Yucoco’s startup idea is fast becoming a favorite hub of fanboys and enthusiasts alike.


How It Stands Out

We were impressed with Hanniel’s easy site navigation and use of simple fonts.  The use of high-definition photos relay a story or two that amplifies viewing pleasure. Its clean design aesthetics was a breather from your usual busy layouts of user-made art and collectible sites.

Although this blog network is still in its development phase, AnotherStupidIdea.com is neither a stupid nor an ordinary startup idea. Oddities.us, its first of the startup's five network sites, registered a total of 49,500 unique visitors at 50,000 page views alone since its January 18th soft launch.

Hanniel’s first concept-turned-blog idea, is a hotbed of luxurious toy and collectible interpretations by designers all over. Fancy a Dunny turned duck or a teddy trooper space monster? Bad-ass customized Nerf Guns anyone? Or how about bidding for your very own Depp and Jolie by a Filipino master craftsman? This blog site shows off astounding creativity ranging from the heartwarming to the strange. 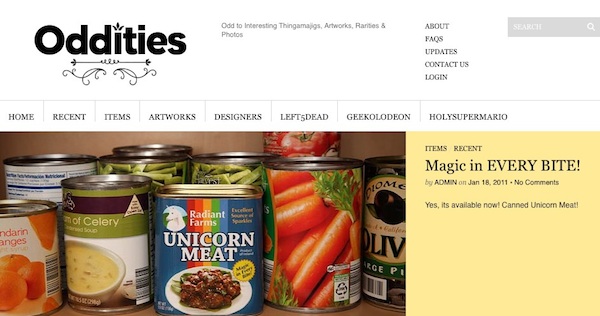 The overwhelming response from viewers led Hanniel to create additional blog sites to cater other items, artwork, ideas and inspiration that do not fit the first site's mould:

Geekolodeon.com was the first "offshoot" site dedicated to geek fascination. This blog site shows off fascinating popular game and internet concept gadgets, artwork, and tech news. Popular communicator designed from Fallout 3, Life Detector Pin and aliens on break were easy delights and are all  to reminiscent of geekdomness to game and pop literature enthusiasts.

HolySuperMario.com was launched February 5th, and serves as a vanity mirror, and serious eye candy, to Cosplay, Glamour and Pinup fans.

Left5Dead.com was launched February 7th, and will serve as an inspiration site for fantasy and sci-fi novelists. It aims to showcase concepts of artists, Dungeon Masters for Dungeons & Dragons and other RPG games.


Hanniel is down to his last network site. FalconPUNCH.us is currently on construction and promises to feature life's easy solutions.

AnotherStupidIdea.com is expected to launch officially as a concept house of odd by the end of the first quarter.

Got some questions, comments or feedback for Hanniel? Check out his startup updates on Oddities.Us Facebook page and his Twitter feed.

Have a new startup and would like to be featured on Micro.ph/one? Contact us here and we'll see what we could do for you.

This entry was posted on February 10th, 2011 | Posted in Profile