SwipeTapTap has fast become a popular game app with iPhone, iPod Touch and iPad users. A creative output by MochiBits’ Kyle Yamamoto and Howard Dy Go, the game’s aim was to serve the general gaming public across all ages, that even your limited tech-skilled Mother would approve.

How it stands out
Already featured in Apple’s iStore New and Noteworthy list a week after they released the app for sale and in Good News with GMA news anchor Vicky Morales, this mobile game app will have a first-time player select four game modes that will ultimately test one’s motor brain performance.

part of the screen.

Memory mode is the game’s version of the classic Simon Says game. Player will have to memorize each of the nine distinct moves in random order to win the game.

The Speed mode will have a player flex his dexterity as he attempts to add the most number of correct moves under a time limit. The player will have to master more moves each time he progresses to another level.

App Specs and Creative
Creating SwipeTapTap was deemed a breeze by both Yamamoto and Go. Using Apple’s iOS XCODE SDK along with COCOS 2D, the entire creative process was said to be “too much fun to feel challenging, it was a pleasure to do it and to learn what we needed to learn to get it right”.

How we love it
Any fan of DDR games will love this game app. It may not be intricately designed, but we simply love the minimal game design aesthetic. Its simple text-and-graphic instruction allows a new user to figure out how to play it in seconds. 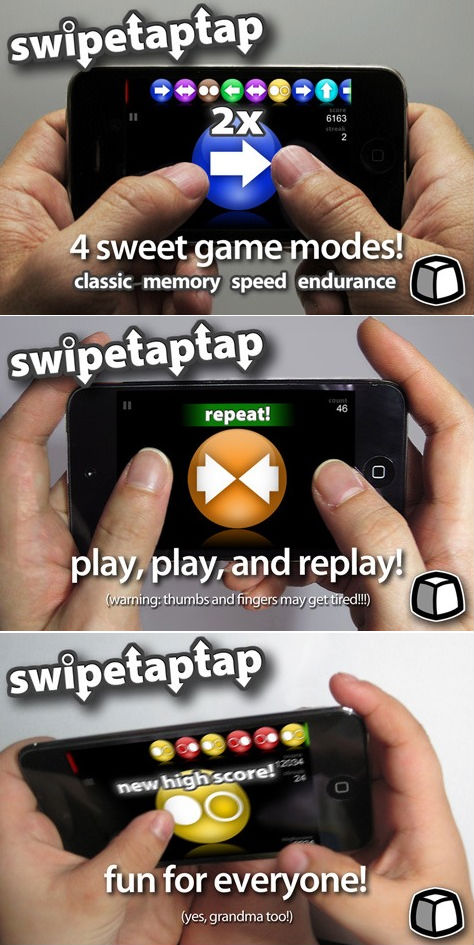 The game app is a great option for anyone who’d want to kill time anywhere with its feature ability to play either the game’s catchy theme song, or your soundtrack of choice from your music device without affecting game loading.

Major points for the Speed and Endurance modes. With its engaging play and warning beep sounds, we were almost a swipe and two taps away to winning coveted stars to unlock more challenging mode levels, it’s as if we can’t get enough of it.

Mochibits is excited for the app developments in the coming future. They intend to release a new version that will have several changes in Classic mode:  an additional level and an extra stage for all Classic levels.

Players will also anticipate a very cool feature: the ability to play music of your choice while playing.

Moreover, the version is expected to have two more exciting modes for the serious players who can’t get enough of the variety of modes the app already has.

SwipeTapTap is available for iPhone and similar devices at the App Store now for only $1.99. Click here for purchase and hardware specifications.


"Fun game, but really does give your quick thinking/reaction skills a workout... A game worth buying."


"Another innovative and very addictive game... fun and great game that keeps your brain working."